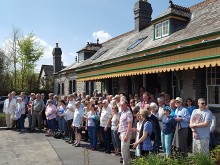 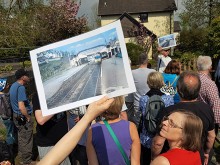 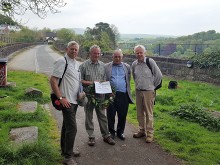 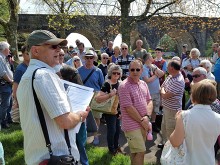 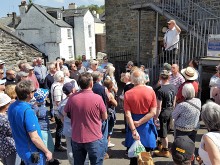 Marking 50 years since the closure of Tavistock's railway

THE sad day 50 years ago when Tavistock lost its railway is being commemorated next weekend with events in the town – and a call for the line via Tavistock to be instated.

There will be a rare chance to look inside the former station during a guided walk led by local railway historian Stephen Fryer on Saturday, May 5 – 50 years to the day when the last locomotive pulled out of Tavistock station.

Mr Fryer will also lead the group across the viaduct beside the station which once took trains down to Bere Alston and on down the Tamar Valley to Plymouth.

A miniature steam train, something like the ones which once ran on the Southern Railway route albeit a bit smaller, will be offering rides for children over the viaduct in the afternoon.

And in the evening, Mr Fryer will join former Tavistock Station railwayman Bernard Mills for a talk at the United Reformed Church in Russell Street. While Mr Fryer will explain the history of the line, which opened in 1890, Mr Mills will share his memories and anecdotes from his time on the line.

Mr Fryer said the anniversary was a time both to celebrate the achievement of bringing Tavistock its line – and redouble efforts to restore the railway between Tavistock and Bere Alston and eastwards to Okehampton and Exeter. Campaigners point out that the route would give a second route from London to Cornwall as an alternative to the precarious Dawlish section.

’It was a great tragedy when this line closed and an even greater tragedy if they don’t finally get around to opening it again,’ said Mr Fryer.

‘We are commemorating its closure and we are also highlighting the stupidity of it. I’m sure these lines were unprofitable, but to rip the line out was very shortsighted. The railway opened in 1890 and took three years to build. It was a major feat of engineering.

‘I was 15 when it closed and I lived in Cawsand in south east Cornwall then, so I missed having a ride on the line completely, although I had the chance to write the history of the line later on.

‘At the time it opened, the promoters of the railway said the line was opening up a new and important link for business. The orchards and flower fields at Bere Alston boomed after the railway opened. It was the way to get to London. You could post a letter on the train and it would be delivered to its destination that same day.’

His talk, which sets off from Bedford Square at 2pm on Saturday, May 5, will explain how the viaduct was built by thousands of workers, and Drake Road was built under the viaduct came into being because of the railway. ‘It is now the main route out of town going north,’ he said.

The walk will include a rare opportunity to inside the now privately-owned station building, next door to the borough council offices at Kilworthy Park and a walk along a section of the old railway track over the viaduct.

The evening talk, which will blend history and anecdotes, starts at 7.30pm on the United Reformed Church. See https://www.heritageintavistock.org/events.

On May 5, 1968, the last train left Tavistock (North) Station and the town’s link to the national rail network was severed, ending nearly 80 years of mainline rail services.

The line had originally been built for the London and South Western Railway (LSWR) by the Plymouth, Devonport and South-Western Junction Railway Company, (PDSWJR) between 1887 and 1890, opening (with great fanfare) on June 2 that year.

In Tavistock, it was the station, viaduct and Drake Road that were the major works undertaken.

Tavistock Station covered about five acres, the whole site having been excavated from the hillside. The station building was built of granite, quarried from King Tor Quarry on Dartmoor, set with ‘snail-creep’ mortar and blue brick facings. It had a booking office, refreshment room, along with ladies’ and general waiting rooms.

Both platforms were covered by canopies supported on cast iron columns, (which had been cast in the nearby Tavistock Foundry) and surfaced with tarmac, then a new product. The station yard was equipped with a large goods shed and sidings, as it was expected to (and did) handle a lot of traffic.

Tavistock Viaduct is 420 feet long and consists of five spans of 50ft and three spans of 32ft, with a height of 70 feet from the street below. At the centre is a small arch on a pier 22ft thick, which is a consequence of the narrow, parallel streets below. The railings were fitted to the top in case any train had to stop short of the platforms. The piers are of granite, (also from King Tor Quarry) and the arches are constructed from huge concrete blocks, which were cast on site before being placed into the viaduct and then faced with more granite.

Drake Road involved the demolition of several properties (including a locally famous tea-room) and some major excavations. The work on the new road took a considerable time to complete, and was only finished a matter of weeks before the official opening of the line.

JONATHAN Mann, who pulled the last signal at Tavistock North station as a boy 50 years ago, has memories of the station stretching back as far as he can remember. Growing up in nearby Glanville Road, his mother would push him around the corner to the station in his pram.

‘It was a nice flat walk for my mother, so I have got her to thank for my love of railways,’ he said. ‘I was going up there as a boy from that moment on. I once ran away from home and they knew exactly where to find me!

‘I remember the steam locomotives going through, and as a small boy being stood up on the footplate of the engine.

‘We knew all the people who worked up there and so, on the day of the last train, the stationmaster arranged for me to go up in the signal box and pull the last signal!’

That love of trains stayed with Jonathan throughout his life. A choral conductor by profession, he has now returned to his first love and is employed full-time at the Launceston Steam Railway, where his duties include driving the trains.

The station platform at the Launceston narrow gauge heritage railway features the canopy which originally graced Tavistock North station, which was going begging after the Tavistock station shut on Sunday, May 5, 1968.

‘It gives real atmosphere to the station,’ he says. ’People don’t realise it, because it looks like it has been here for years, but in fact we have built the whole station ourselves and having some real railway things like the canopy gives it authenticity.’

And Jonathan, who now lives in Gunnislake, has also a Tavistock North sign, which was given to him by one of the contractors who was tasked with dismantling the Tavistock North station after it closed, many years later.

‘They cleared all the scrap from the site, but any bits like that they could have. He came in here with the sign and said “I don’t know if you’d be interested in this, and of course I was!”

This Microportal is built on the 2day Microportals platform which provides you with 3 click access to local and global information crucial both to your personal and working life. The platform provides live local data on transport, what's on, accommodation, eating out, shopping, sport, religion and weather as well as comprehensive reference and resource sections including TV, radio, online shopping, route planning, health, education and more.